Audi’s large SUV starts its stint in our long-term fleet with the time-tested Mahabaleshwar trip, but we take the more treacherous route this time.

The most dangerous highway (if it can be called a highway) is the NH66, intended to be a four-lane ‘upgrade’ of the erstwhile NH17. Once a picturesque, single lane, Mumbai-Goa highway, NH17 happily served generations of motorists before the expressway boom that mushroomed all over the country, after the turn of this century. Cutting through Maharashtra’s Konkan region, NH17 was once the fastest way to get from Mumbai to Goa, but not anymore. It’s now an utter mess, due to a partially complete expansion of the highway left in limbo for the past 12 years.

Large swathes of unfinished sections, treacherous road conditions and winding terrain have made the NH66 a veritable death trap for motorists, and a car breaker too. But what draws me to NH66 is that it is still the fastest way to Mahabaleshwar, a good 30km shorter than the longer Pune route. Plus, the last 40km on the fabulous Poladpur to Mahabaleshwar ghat is a drive I always look forward to. But to brave NH66, you need the right car, or rather a solid and safe SUV with a lot of ground clearance. 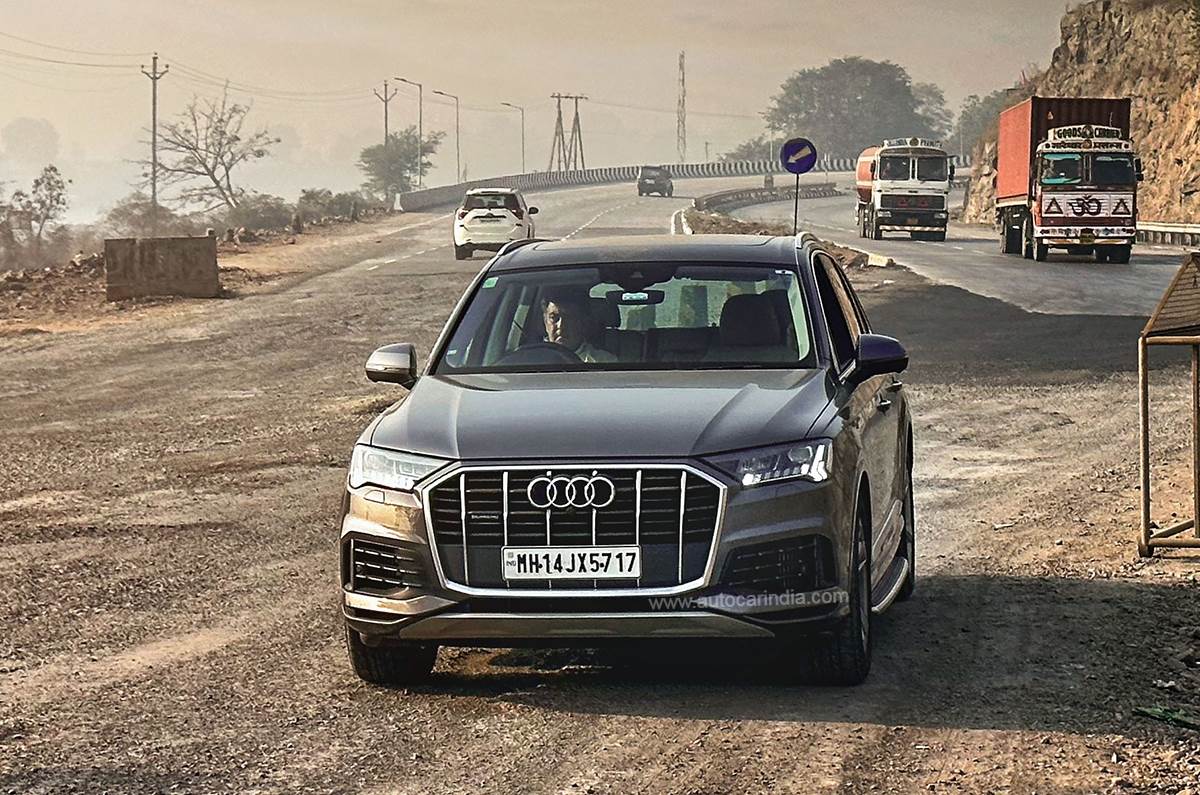 The Audi Q7 entered our long-term fleet just before my customary New Year’s break in Mahabaleshwar. The timing couldn’t have been better because I needed a car that had loads of space for the family and luggage, a comfy ride to smoothen out the bombed-out sections of NH66 and a strong engine for quick overtaking on the remaining single-lane sections. Above all, I needed a car that was absolutely safe, especially if I was taking my family on a highway that, according to reports, has witnessed almost 2,500 fatal accidents in 12 years. Like most German luxury cars, the Q7 is solidly built and bristling with safety tech, including eight airbags and active safety features like a blind spot monitor and a brake assist function. Very reassuring. 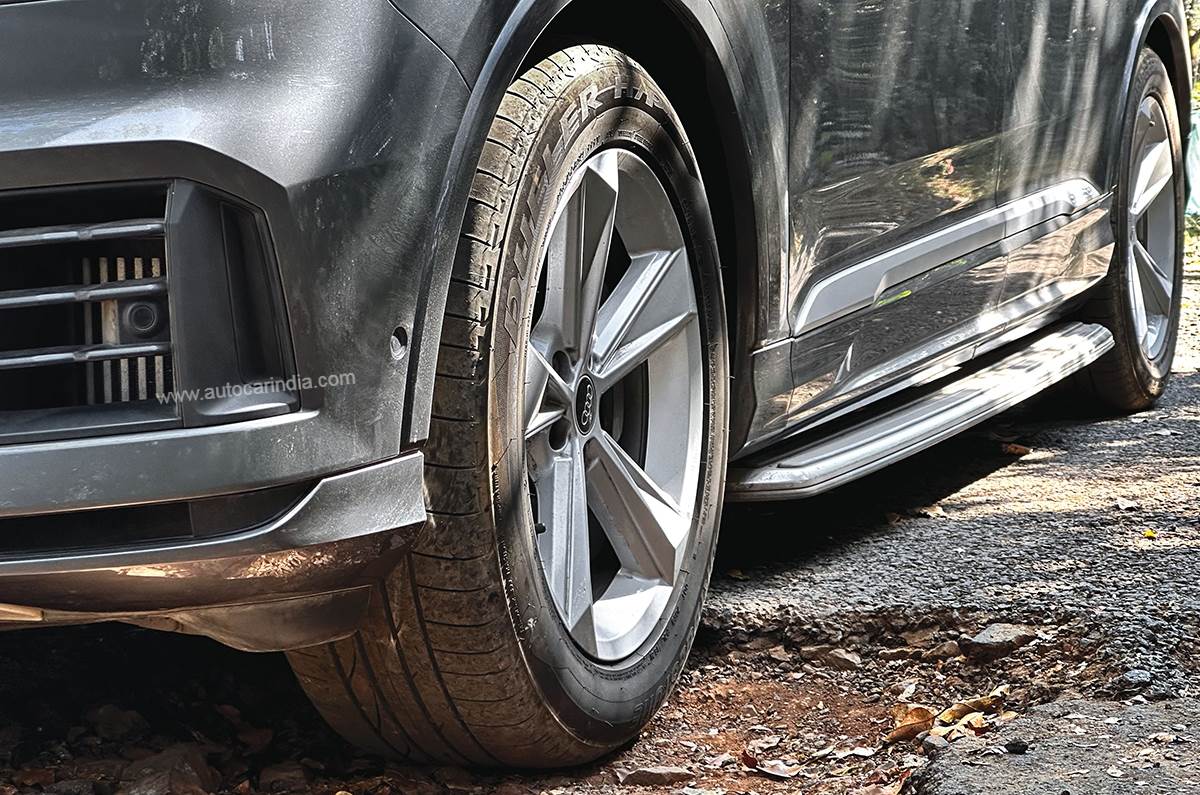 Topping up the 85-litre tank is a costly affair, especially with Indian Oil’s pricier high-octane XP95 petrol, which I find works really well in all of the VW Group’s high-compression TSI and TFSI engines. Work out the math for a tankful of XP95 at Rs 113.31 per litre (Rs 7 more than regular petrol), and suddenly your drive to Mahabaleshwar is more expensive than a flight to Delhi. Worth it? The Q7’s 340hp 3.0-litre V6 certainly thinks so. It runs smoother and feels more responsive than when on a diet of regular fuel.

In fact, the silky smooth V6 with its lusty torque spread was just what I needed to scythe past long lines of trucks on the single lane sections. Overtaking is an absolute breeze and you don’t even need to click the left paddle to manually go down a gear. The 8-speed DCT is wonderfully quick, intuitive and always in the right gear to make the most of the 500Nm of torque. Unlike a turbo-petrol, this engine likes to be revved and that’s when you want to take charge of the gearbox and wind the mill to its 6,500rpm redline. 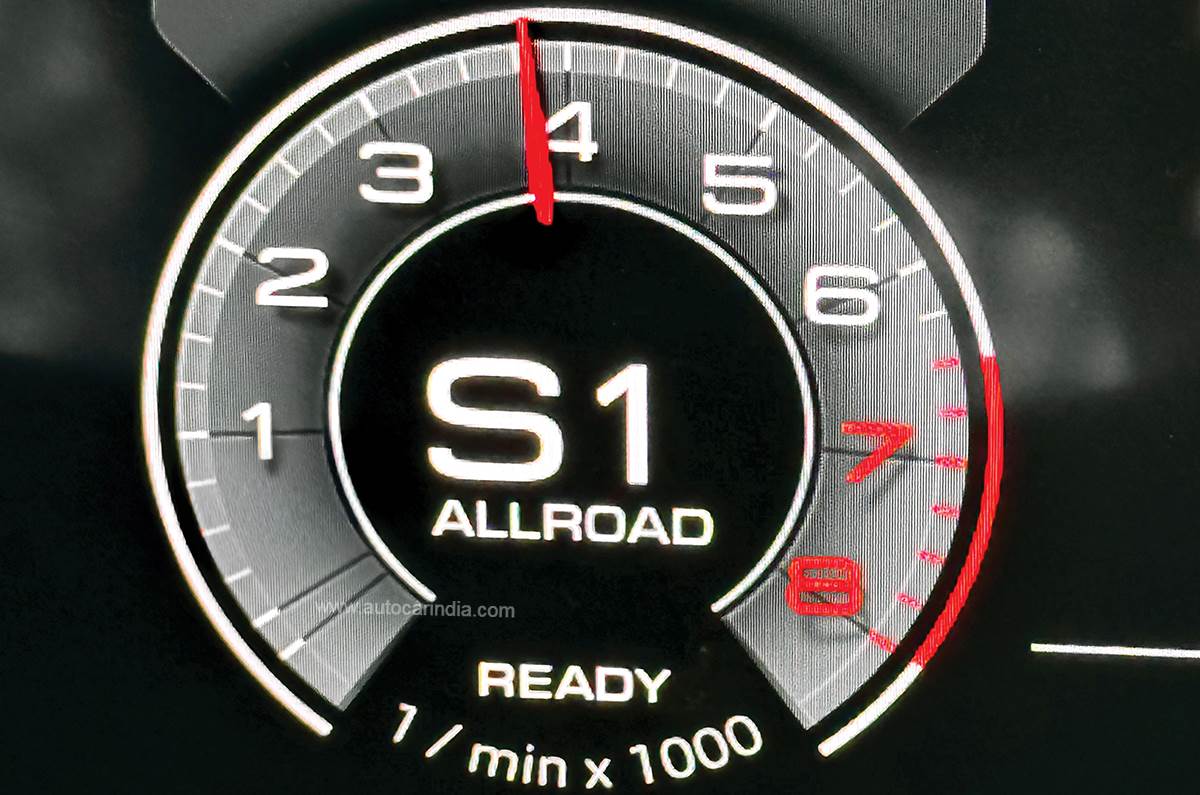 3.0-litre V6 is punchy, refined and loves to be revved.

We have always rued the discontinuation of the 3.0-litre TDI diesel in the Q7, but for the first time I didn’t miss it. The Q7 petrol has enough grunt and a wide torque spread to waft you effortlessly to silly speeds. But you don’t want to be doing silly speeds on NH66 because of the nasty surprises thrown at you. Overtaking in the fast lane can be downright dangerous because, without warning, cars and bikes come at you from the opposite direction. This is due to the fact that, on this unfinished highway, sections of smoothly concreted road abruptly end, and traffic gets diverted to the opposite side without warning.

So you need to be incredibly alert and you simply can’t take your eyes off the road, and this leads me to one flaw in the Q7. The third touchscreen, a dedicated air-con panel, sits low in the console, so you have to take your eyes off the road to operate the controls. In fact, every time I wanted to change the temperature or adjust the blower speed, I actually had to slow down to do it safely, because when you’re looking down, the road isn’t even in your peripheral vision. I can’t understand why all carmakers don’t give hard buttons for the much-used and fiddled-with functions like the air con. 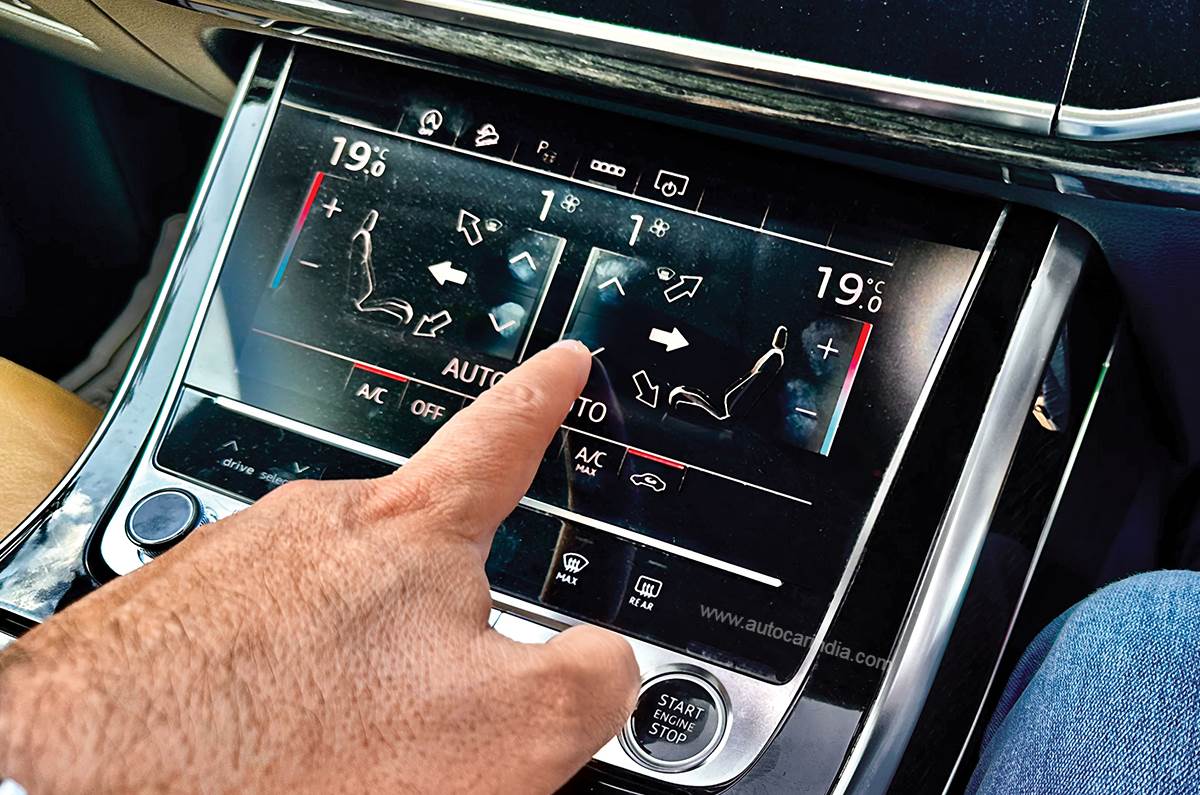 Operating air con screen takes your eyes off the road.

The freshly laid four-lane sections on NH66 tempt you to dig into the Q7’s huge reserve of power. But just when you’re about to settle into a high-speed cruise, the concrete road, without warning, suddenly gives way, and before you know it, you’ve hit a dug-up road with stones, crumbled tarmac and huge potholes. This sudden switch from a smooth surface to something that looks like it’s been hit by a missile can catch you out, if you’re not alert. Tyre blowouts and broken suspensions are common, but the severity of the road is remarkably masked when riding in the Q7.

The Q7’s high-profile 255/55 R19 tyres are the first line of defence against sharp edges, stones and ruts, whilst the air suspension soaks up the bigger potholes and bumps. After driving on NH66, I can categorically say that no other luxury SUV soaks up bad roads as well as the Q7. This is the best-riding SUV in its class. Period. The suspension has been tuned purely in the interest of comfort, and even in Dynamic mode, the sportiest of the Q7’s drive modes, I find the big Audi SUV too softly sprung. 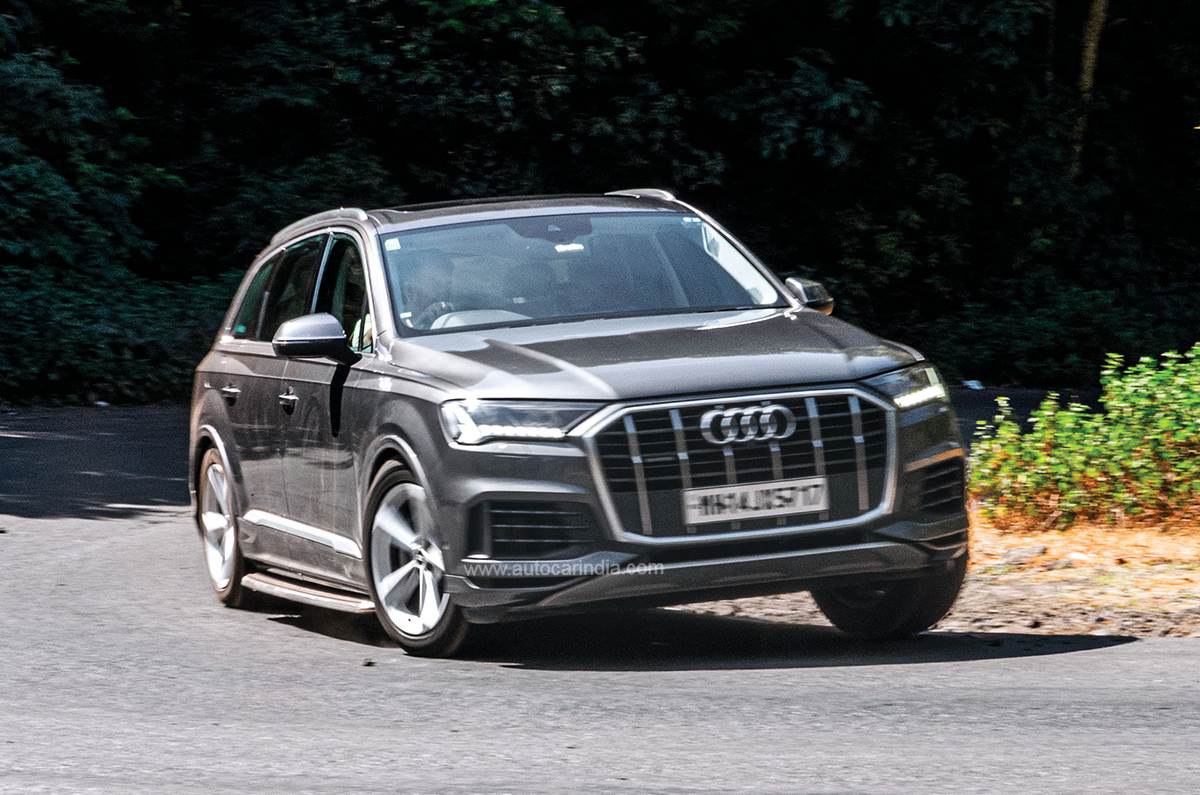 Big and heavy Q7 rolls quite a bit when pushed through corners.

This was immediately obvious driving up the Poladpur ghat. Here, a tauter suspension would have gone a long way in keeping the roly-poly Q7 from leaning side-to-side at alarming angles when attacking the staccato of tight corners on this narrow mountain road. It’s fair to say the big and heavy Q7 doesn’t particularly like corners and prefers to be eased rather than hustled through them.

As a long-distance car, the Q7, with its roomy cabin, magic carpet ride, fuss-free dynamics and polished powertrain, is simply hard to beat.

Maruti Celerio to be sold as Toyota Vitz, will be made in India